Donate to the Library! 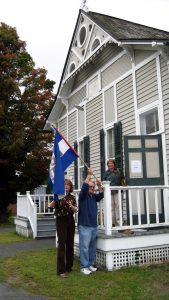 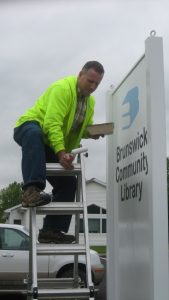 The Brunswick Community Library had its beginnings as the Garfield Reading Center, an organization founded by a group of Brunswick residents determined to form a lending library after a telephone survey revealed many residents desired library services. The Town of Brunswick had earlier acquired and was restoring the long neglected 1881 two-room schoolhouse known as the Garfield School in Eagle Mills, and offered the reading center as well as the Brunswick Historical Society free space in the charming historic structure. The Garfield Reading Center, taking its moniker from its new home, opened its doors in spring, 1988, with an operating budget of $15,000, a part-time librarian named Peggy Main, and about 3,000 books donated by other area libraries, booksellers, and local citizens. The Garfield Reading Center was initially open late afternoon to early evening Wednesday through Friday and Saturday 10:00 AM—3:00 PM. Volunteers were essential to all aspects of the new organization’s operation, from preparing books for shelving and circulation to assisting the librarian with serving the public.

While the Garfield Reading Center initially lacked the credentials to receive a charter from the NYS Department of Education, the new library proved popular, offered steadily expanding services and hours, and earned a provisional charter as well as membership in the Upper Hudson Library System in 1993—a significant achievement as membership in Upper Hudson permitted library patrons access to pooled collections of books, periodicals, reference materials and works published in audio and video formats through the interlibrary loan process. The following year the Garfield Reading Center was renamed the Garfield Library when it received its registration from the NYS Board of Regents. In 1999 the Garfield Library changed its name to the Brunswick Community Library at the urging of then librarian Karen Snyder.

A Friends of the Library group was formed in 1997 and this group of volunteers initiated the popular Garden Day fundraiser still held annually. The Friends develop and present a variety of fundraisers throughout the year to support special programs and services.

Just a handful of years after opening, our library recognized it needed additional space. Libraries, by that time, were offering much more than loaned books and periodicals-computer use, media such as music CDs, movies, and audio books were requested by patrons and the popularity and worth of programs for folks of all ages called for a multi-purpose room. There was also concern about the old Garfield School’s capacity to bear the weight of the little library’s overflowing bookshelves. Many options to relocate were explored over many years, but generally involved too great a cost and other issues such as location, parking, and potential for expansion. Finally, in 2008, the Brunswick Community Library identified and was able to secure its building, a relatively new but unused commercial space, at 4118 NY Route 2. The new premises quadrupled the square footage of the Garfield School premises, and offered better parking and the opportunity to retrofit a more modern building for library purposes. The year 2009 was a challenging one for the Brunswick Community Library’s board of trustees who cautiously, but enthusiastically undertook the planning and fundraising responsibilities associated with creating a new home for the library.

Major events associated with acquiring a new library building mostly revolved around fundraising. It was determined about $700,000 would be required to cover the multitude of costs identified in the planning process. Patricia Carlson and Ed Martin volunteered to co-chair a fundraising committee. Opportunities for grants were sought as well as support from local businesses, library patrons, and the general public. By spring, 2009, nearly half the needed funds—about $350,000—had been given or pledged, including a state library education grant, two designated state member items ($50,000 from Senator Joseph L. Bruno and $5,000 from Assemblyman Tim Gordon), several corporate and charitable fund grants, and donations from library trustees and patrons. As the new library’s planned opening in the fall, 2009, approached, fundraising efforts intensified.

May 28, 2009 was the official kickoff of the “Watch Us Grow” Fundraising Campaign and it was held on the premises of the new building. Planting of a “Tree of Knowledge,” donated by Lew and Sharon Zankel, was held instead of a traditional groundbreaking ceremony inasmuch as the new building already stood. A sign built and installed by Bill Bradley showcased the library’s new logo—a design featuring two books stacked to form the letter B (for Brunswick)—designed and contributed by Doug Bartow of the firm id29. A six-foot-tall wooden sunflower, designed and crafted by Patrick and Carolyn Abrams, was “planted” aside the new building to gauge fundraising progress.

By the time the ribbon across the entrance to the new library was sliced by local officials and library leaders on September 26, the library could report an additional $50,000 had been raised. The Brunswick Community Library, while still many dollars short of its goal, had realized significant success over a short period!

The Brunswick Community Library ceased operations at the Garfield School on September 12, 2009. Randi Bentley was the last patron to use the library’s public computer, and Dorothy Arthur was the last to be served at the circulation desk, which was staffed by Karen Strang and Sara-our current Library Director-who was then employed as a clerk. Lew Zankel, then a board member, and wife Sharon helped close the building.

The grand opening of the new library was held on September 26, 2009, with then Rensselaer County Executive Kathy Jimino and Brunswick Supervisor Phil Herrington, Judith Brown, Patricia Carlson, and Ed Martin cutting the ribbon. The weather couldn’t have been better and the public turned out throughout the day to see the new library. Four new public computers were the star of the show; several authors including Jack Casey sold and signed books; Ruth Pelham of the Music Mobile offered entertainment; and Dorothy Murray was one of several volunteers who provided children’s crafting activities. Sara was also there-working the circulation desk. Many children left the event with a new backpack (twenty-five packs donated by SEFCU.) Julie Zelman was then Library Director and greeted two former Brunswick librarians, Carol Trager and Debbie Canzano, who were among the well-wishers.

The Brunswick Community Library began renovating the building it had acquired at 4118 NY Route 2 in early 2009. 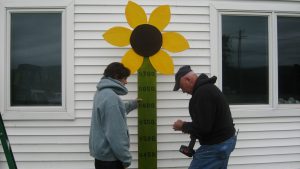 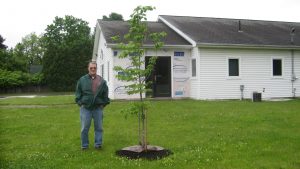 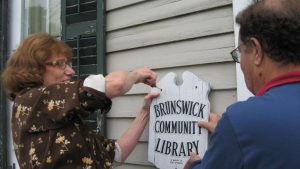 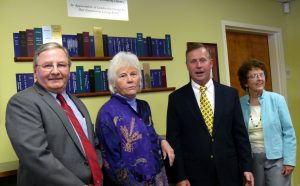 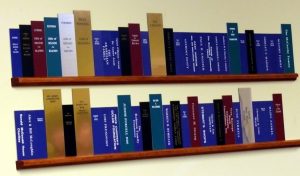 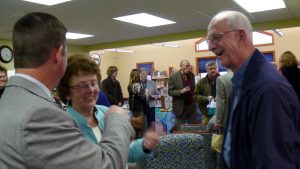 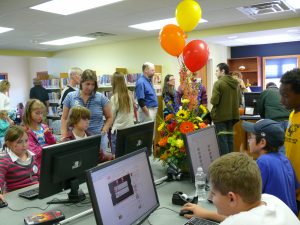 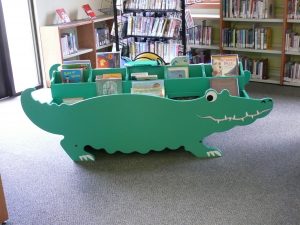 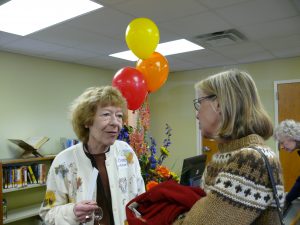 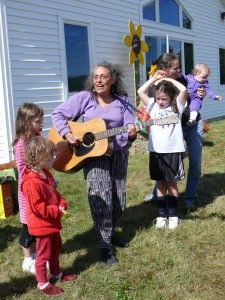 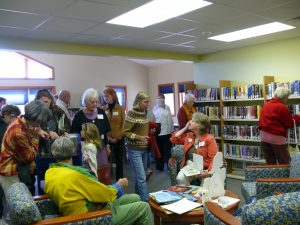